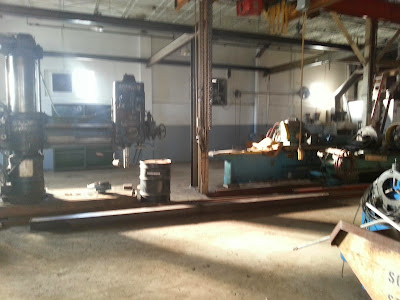 I am working in the "Big City" on a project at a former machine shop which finally gave up the ghost and shut down in '08 at the outbreak of The Great Recession. I walked alone in this silent cathedral and snapped this pic as the late afternoon sun slanted through the dirt-smudged windows, casting light upon the sleeping behemoths of bygone industry. Everything was still just as it was when the last worker vacated the shop and chained the doors shut.

Located just south of Indianapolis’ downtown, with its gleaming high rise office buildings, the soft industrial underbelly is crumbling and empty. It is slowly being replaced by billion dollar sports venues, trendy bars and expensive restaurants. 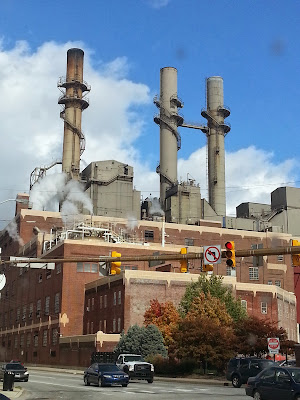 Not far away, down by the river, is a homeless shanty town, its inhabitants the alcoholic sons of the former workers who lost their jobs in the seventies and eighties, living in tarp-covered pallet skids and sipping wine from discarded lunch sacks, rendering it into staggering gratification and street vomit. Around the fringes the dependent class are caged and policed by government baby-sitters who mend the overpass fences to keep debris from being thrown on the cars passing on the interstate below, as the rats and lemmings rush to their downtown cubicles in a frenzied, stress-fueled madness.

I'm glad to live in the equally artificial, yet bucolic agricultural hinterlands, where at least I can shoot my guns out the back door and no one cares, and pee off the front porch and no one sees.