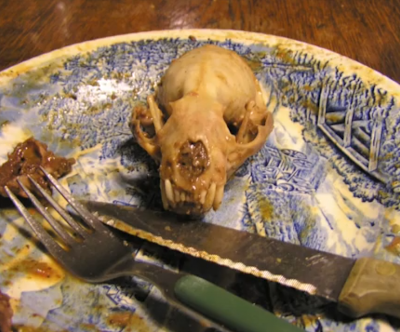 Found this wadded up in he shredder.

The Boat People decided to leave the oppression and slavery of European Totalitarianism where they were forced to live in dank, miserable hovels, watching Monty Python re-runs on 19” black and white televisions and spending their days in piss-drenched Monarchial squalor. They braved the icy chill of the North Atlantic with it’s hurricane winds and sea serpents out of the basic human yearning to be free. Against all odds, they landed hard on Plymouth Rock and scrambled up its sheer, hard surface. They stood atop and looked back eastward, upon the injustice and tyranny. The first months were difficult, nights spent sleeping in flea-ridden sacks, their days filled with toil, smoking hardscrabble reefer.

The powerful costal savages had been living an idyllic existence eating organic vegetables, constructing canoes out of fifty-five gallon oil drums and brutalizing the weaker, Hindu Indians with primitive stone weaponry and sharp, collectivist dogma which the used to eviscerate and cripple. They decorated their huts with the scalps and dried genitals of vanquished foes and turned their women and young boys into sex-slaves.

When the hazy days of summer gave way to November‘s chill the Pilgrims decided it was time to show the heathens how to party. The celebration began. Dead deer and diseased birds were piled high on picnic tables while beer and Nyquil flowed freely from birch bark vessels hung high in the trees. Young lads and savages played Frisbee and touch football in woodland clearings while a Polka band played dance music deep into the moonlit night. Young, fat squaws were fed Frosted Flakes and buttermilk, then dragged giggling and kicking into the forest to be courted, cajoled and injected with semen and syphilis. Small pox and intravenous engine coolant. A good time was had by all.

The Indians fared much better as they were pushed ever westward at the point of muskets and artillery shells, until finally coming to rest in Government reservations complete with house trailers and health clinics. There they made a living selling rubber tomahawks, plastic trinkets and tobacco products to fat, indifferent tourists in Chevrolets, and went on to find marginal employment in the glamorous, fast-paced world of the Casino Gambling Industry..
Posted by Hermit at 4:00 AM