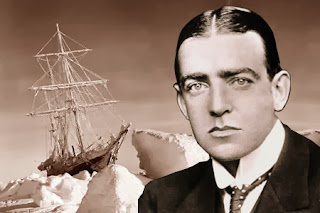 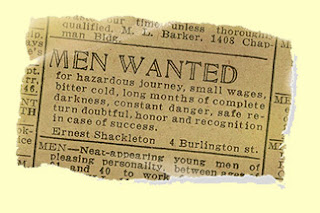 Just finished reading Ernest Shackleton's epic The Heart of the Antarctic again. It is an incredible story of his three month journey attempting to reach the South Pole. After a frightening voyage over rough seas in an undersized, overloaded whaling vessel, Shakleton and his posse spent an entire Antarctic winter in a tiny improvised shack. Then, when the weather turned a balmy -25 F, Shakleton trudged through snow for three months pulling sledges, climbing mountains and nearly starving to death, all with primitive turn of the century equipment. A large portion of the book is his eloquent diary he kept during the march. He made it farther south than any other mortal, but never made the pole. After walking some seven hundred fifty miles he fell ninety miles short before having to turn back before starvation and the Antarctic winter caught up with him.

To use a cliché, Shakleton was from a time when "men were men." Long before such things as bottled water, heated seats, hand sanitizer, manscaping, sensitivity training or wind chill calculations.

I'm first struck by his awesome literary skills, while keeping his journal under the stress and strain of his ordeal. An ordeal which included frostbite, starvation and altitude sickness. Secondly, he NEVER whined or complained. Through snow blindness and dysentery he trudged onward, averaging about twelve miles a day. Incredible, considering the average Amërïkän would throw a hissy fit if the fast food worker forgets his extra cheese, and would weep uncontrollably if he had to walk two miles on a fine spring day in his pair of two-hundred dollar Nikes!


Shakleton's kind of willpower and resolve is a sad juxtaposition when compared with modern Western Man who, more often than not, confuses inconvenience for emergency. Today's whining, prissy metrosexual seems to think someone else is obligated to solve his petty problems for him. A sad population of fretful eunuchs, spending their days looking for reasons to feel "offended," while lamenting the fact that their cell phone isn't working.

Makes it hard to schedule a manicure.

Email ThisBlogThis!Share to TwitterShare to FacebookShare to Pinterest
Labels: Badass, Undaunted courage in the face of danger