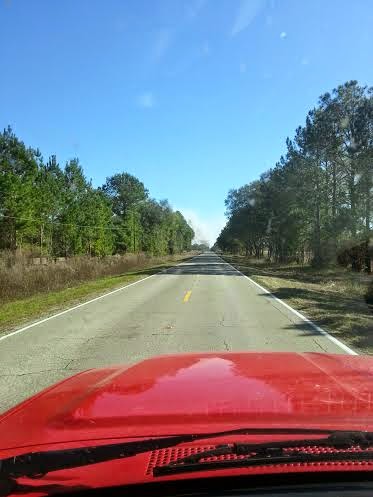 Alabama is a long state north to south. I jumped off the superslab around Greenville and drove county roads the rest of the way. Woods and hills in the north give way to empty fields where cotton once grew, then further south to lumber plantations thinly dotted with corrugated shacks and decaying automobiles, the side ditches empty save the carcasses of sharp-boned roadkill dried and blackened on the rough pavement, eyes wide open, but seeing nothing.


Had to stop for a band of grim-faced men in rusted pickups probing the underbrush with sharpened sticks, and bloodlust. Their truck beds bore packs of caged hounds, red-eyed and ravenous, their slatted ribs showing through thin and scarred hides, eager for the hunt. I drove on.


Around dusk we pulled off into a nondescript hobo jungle. I entered a building marked “Campground Office” ringing one of those little bells on a coiled spring that hung over the doorframe. A man was seated behind the counter watching a fishing show on an old-school television. He was an older man, big-bellied with a mottled complexion, and greasy hair the color of tossed bathwater. He wore thick-lensed glasses with frames made from antelope bones.


He barely glanced as I entered, but continued to watch his fishing show. A small poodle at his feet, with a coat of dirty lamb’s wool, stared at me with pink and runny eyes. I cleared my throat and asked if he had a site available for the night. He peered out over his glasses at me with a look of vile contempt and turned back to the TV. After a long, awkward pause he finally said, “Twenty-fi’ dollah’s cash.”


I pulled out my wallet and laid my money on the counter like Doc Holliday and waited for him to raise or call. After another pause, and with great effort, he lifted himself from his chair and approached the counter. He quickly folded the cash into his dirty shirt pocket and pulled out a crude printed map of the campground and said, “Site eighteen, checkout at eleven.”


I quietly thanked him, and as I turned to leave, looked down at the dog who was sniffing my pant leg. He looked up and growled a soft disapproval, but allowed me to pass.
Posted by Hermit at 5:42 AM 8 comments: 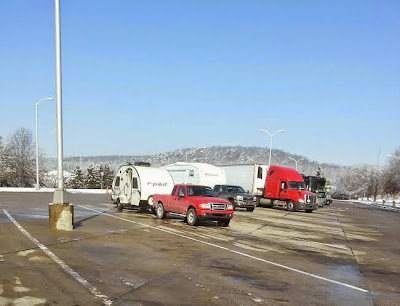 Sputnik knows long before I do that a journey is imminent with that unearthly canine intuition we mere mortals can never comprehend. Days before our departure she’d leap into the truck’s open door and stubbornly refuse to exit. She must be coerced and cajoled with veiled threats of violence and promises of dog biscuits and cheddar cheese. Hooked up and loaded the Gypsy Pod and was ready for takeoff Saturday morning. The weather was moderate, unlike the poor conditions during last year’s southern migration.
Trailing the Pod on my tiny pickup and traveling at interstate speed is similar to towing an obstinate, tethered parachute like the one used to stop the space shuttle during landing. Doesn’t do well up hills or into a headwind. Maybe a truck cap would help streamline its overall aerodynamic properties, but right now ten mpg is as good as I can get.
The landscape in Kentucky was frosted with a fresh coat of benign snow, but the roads were fine, and we made our way to a cold little campground of I-65 just north of Nashville. They placed me in the back row with the rear of the camper about one-hundred feet from the interstate. I fell asleep to the sound of the nightime highway, which is among the loneliest sounds on earth, and also a favorite of mine.
The siren song of the highway is the sound of restless movement, commerce and flight. Bleary-eyed, high-ballin’ truckers with doctored logbooks trying to avoid the twenty second nap that will end their run, or worse. Desperate families, their meager possessions piled high in the back seat of ancient Chevys, hoping the next town will bring them employment. Undocumented migrants and drug runners crowded into mini-vans and non-descript Buicks flying under the radar and hoping their secrets go unjudged before they make their destination.
After a decent night’s sleep I batten down the hatches, pull up the landing gear and power up the on-ramp as I join the others on Amërïkä’s endless, infrastructural, asphalt bloodstream as I move ever Southward.