Jilted on a Lonely Creekbank 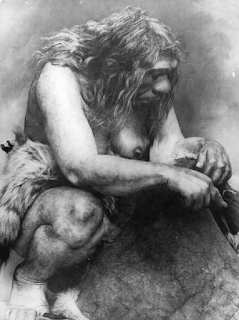 I first saw her along the bank of some unnamed tributary digging up mollusks with a flat-bladed screwdriver. I watched her, mesmerized, from behind a screen of willow branches as she bent to her task, grunting contentedly, her breasts swinging bralessly ‘neath a threadbare Metallica T-shirt. Small beads of perspiration dripped steadily off her heavy brow ridges, falling harmlessly to the sand below and evaporating like leaking coolant on hot asphalt.
.
I disrobed, and moved quietly toward her through the willows. Her ears twitched as those of a frightened mule deer. Her head turned quickly in my direction. She rose abruptly from her position on squatty, muscular legs, dropping the mollusks but firmly clutching the screwdriver. Her dull, expressionless face framed a pair of yellow eyes that sparkled like Listerine™ in a Dixie Cup™. We stood there, suspended in time, staring at each other for what seemed an eternity. Finally, I offered her some cattail root and grub worms. She disappeared quickly into the bushes, leaving me standing there with a handful of grub worms and a broken heart.