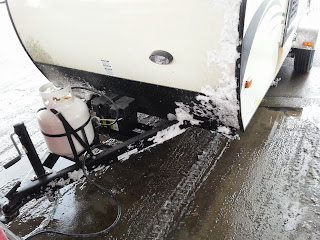 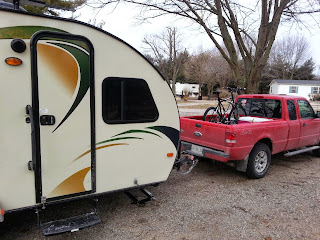 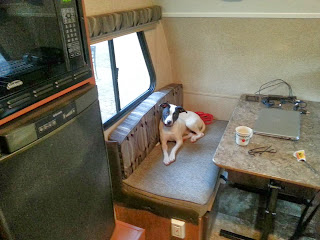 Was hove to at The Compound all day Thursday due to another little snowstorm, but took off this morning with threats of more light snow. The state road out of Jerkwater was snowy, as expected, with two black ruts showing through some packed snow. Took it slow in 4wd and nursed my way down to the interstate. I-65 was better with a few harmless whiffs of dry snow blowing across the road. Fairly smooth sailing.

Being a soft Yank, I HATE pulling a trailer on anything but dry pavement, but I had to get the hell out of Dodge because there was another storm and cold ass weather forecast for Saturday. The road was ok in places but damned if it didn't start getting shitty, in southern Indiana, within about ten miles of where my Suzuki's windshield iced up last March! This area has become, for me, Indiana's Devil's Triangle.

White patches and what looked like black ice. All the traffic, including the maniac semi drivers, were moving along about 60, but I slowed down to 50 scanning for icy spots when I felt the dreaded sensation of hovering over the pavement, no longer in control but just taking the ride, as my truck drifted sideways over the left lane with me steering sharp into the skid with the trailer coming around on my left. I crossed the emergency lane as the seconds seemed like hours while I was thinking; am I gonna' die? will my truck be trashed? will the trailer flip? Fortuitously I hit the median where there was about eight inches of snow which probably saved my ass. The front tires bit into the hard pack and the trailer straightened out behind me as I began to slow, trying to keep somewhat parallel to the highway. I still had some momentum, so my thoughts shifted to: can I really get this thing back up on the road without having to be hauled out with a wrecker? I punched in the 4wd and slowly eased back on to the highway, the traffic giving me a wide berth.

Well, for a few moments I was giddy with the euphoria of having cheated Death, or at least a trashed, brand new camper, and truck. Then it was white knuckles, slow lane, flashers and 40 mph 'til I
got to an exit to survey the damage.

The only thing I found was the lever that releases my poop tank was bent and open, but otherwise everything in one piece. I spent the next 75 miles being the white-bearded old guy in the slow lane who everyone cusses at and passes until I reached southern Kentucky and dry roads with only a trace of snow on the grass.

Which is where I am now, in a pleasant campground, still freakin' cold (about 24), but with a kettle of tea on the boil and Sputnik resting comfortably.

F@#kin" peanut butter is frozen. I'm getting too old for this shit.
Posted by Hermit at 5:00 PM