(None of these pics are mine, but look like the right era. My brother has a bunch of old, dog-eared photos but is totally non-digital and computer illiterate. Someday I'll have to grab the best from him and scan them.) 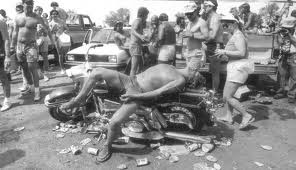 No one gives a shit about the Indy 500 anymore and it’s a damn shame. I live about thirty miles north of the Speedway and always wax nostalgic this time of year. I rarely missed a race in the eighties and nineties, always spent the day in the third turn of the infamous “Snake pit.” We’d get there about 6:00 am and would drop acid, smoke weed and drink screwdriver mix out of plastic gallon milk jugs. The snake pit was like the Wild West back then, largely un policed. Rape, sodomy, drunkenness and knife fights were commonplace. We always brought an old couch and placed it on top of a van or pickup to watch the race. At best all we could see were blurred views of the cars passing, but were too f@#ked up to care 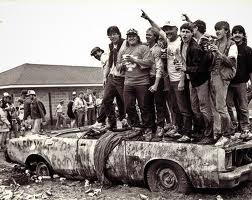 After the race we’d traditionally shove the couch off the van , soak it with gas and torch it on the way out of the track. Cars and trucks would also be set ablaze as the spectators left the infield as well, giving it the appearance of the aftermath of a battlefield, a truly memorable sight, and a fitting way to end the Memorial Day festivities

Sadly, the Snake pit has been replaced with “Family Viewing Hills” and a f@#kin’ golf course!