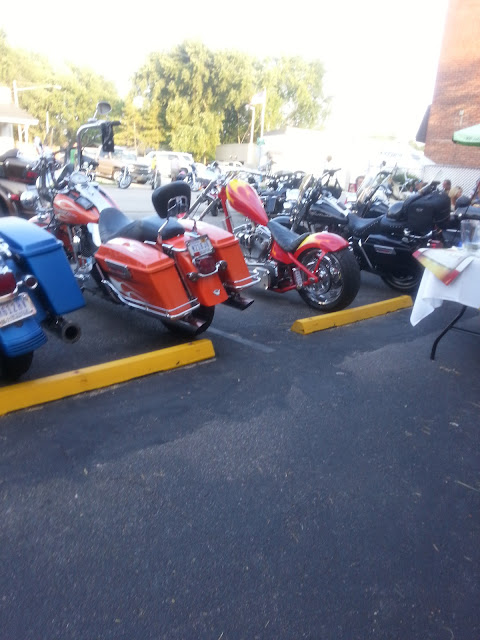 Takes a lot to get my reclusive ass outside the house for any kind of socializing, but I reluctantly rode to a “Bike Night’ when invited by old friends to meet up for a few beers. After fortifying myself with shots of whiskey against the summer’s heat, I took off from The Compound feeling the buzz creeping in. Arrived late and parked my rig in the very heart of Small Town Amërïkä, only to find my buddy and his old lady had already left. Inside, his twenty-something kid, on ankle-bracelet-house arrest was throwing down an impromptu party. Young neighborhood girls, in the throes of white-trash estrus, were gyrating to the beat of hillbilly rap. Sweat beads rolled from ‘neath their neon tube tops and followed the ridges of stretch-marked shame into their tight-fitting, tattered Daisy Dukes. Despite the heat and stifling humidity they danced, frenetic and overactive, hoping the unrestrained movement and perspiration would wash away the confusion, rejection and pain.

After being sworn to secrecy, I walked over, fired up the bike, pulled out and rolled through town dodging bare-footed toddlers in drooping diapers and a feral cat, slunk low to the ground, and glaring at me from under a disabled Buick with eyes of burning hatred. As I pulled out on to the State Highway tiny drops of dissolved poison began coursing through my veins, fueling tattered neurons as it mixed with fermented grains and the remnants of Arby‘s.

Got to the bar and found my friends finishing their meal of fried root and decaying fish. A cover band was playing in the parking lot. They played loud, under the mistaken notion that it would compensate for lack of talent and execution. It wasn’t working. The Frito Bandito showed me what was left of his arm, withered and misshapen, pieced together with bolts and steel cable. The rest of it lay on a hot patch of uneven pavement somewhere in Tennessee under a cloud of swirling bot flies 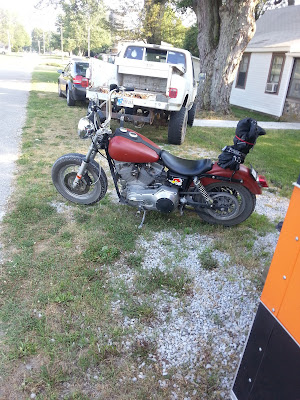 We talked of old times and drank crappy, domestic beer as the local town fuzz made his presence known by eyeballing us suspiciously as he drove by in the fading July light. With no turn signals and way over the legal limit, I made my exit after he made a pass and tiptoed out of town back on the State Highway. I blasted home under the cover of darkness, shirtsleeves and bare headed, comfortable in the heavy night air. My headlights picked up some deer lurking on the side of the road, but I feared not, as a man under the influence, I knew I could cut a deer in half without the slightest wobble of my terrible front-end cycle- sickle.
F^@k you Grim Reaper, not this time.

Woke up Saturday with a terrible headache, bleary and dehydrated. Coors Light is poorly- processed, watered down piss-water, it is the evil brew of demons and unfit for human consumption. Never again.