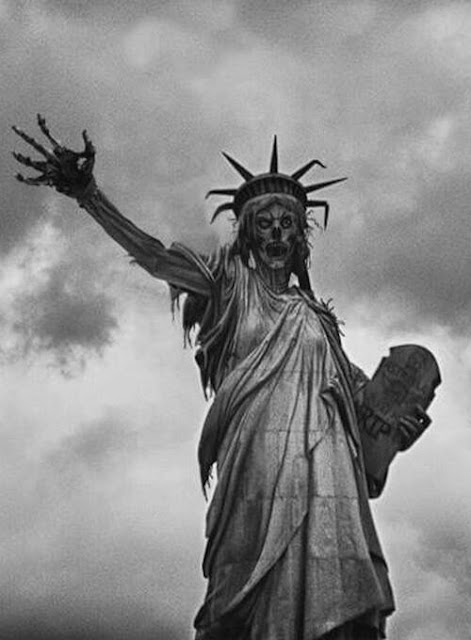 Lady Liberty, symbol of a once-great nation, hikes up her robe, bends over, and shits a vile stream of excrement into the mud-brown New York Harbor. Once-free people have been incrementally stripped of freedom and turned into complacent sheep by Mega-Million Dollar Corporations and Big Government Totalitarians. NSA Big Brothers monitor phone calls as IRS Gestapo agents (soon to be increased by 18,000 thugs in the name of “health care”) intimidate those who dare question authority. The “News” is reported by obedient lap dogs who make excuses with child-like loyalty to Big Government Bureaucrats who wield power with money they print like junk mail flyers . Meanwhile the bloated elephant in the room, soaring to twenty trillion dollars, is artfully hidden in plain sight.

Bailed-out Wall Street Bankers and slick Politicians embrace like giggling schoolgirls while the legs are knocked out from under the dwindling middle class, as they are of no use to the Collectivist Oligarchy. Fat Cat Bankers slap each others backs, wipe Obama's lip gloss off their dicks and go out for another round of golf, while the working man's house is foreclosed upon. The ever-growing number (nearly 50%) of dependent-class useful idiots are warehoused in trailer parks and government tenements, placated with food stamps, and coaxed out at election time to insure the status quo.

Politicians exploit isolated acts of evil scumbags and tell us they need to remove law-abiding citizen’s means of defense, “for our own good,” because, like Hitler, they know it’s hard to load people into box cars when they’re armed with AR-15’s.

Independence Day 1776 wasn’t about drunks with sparklers and diabetic slobs stuffing their faces with hot dogs on Coney Island. It was about revolution, ridding the land of power hungry, meglomaniacal tyrants.

I’m among those who will keep my weapons. The Fascists may kill us, but at least they won’t be loading us into boxcars!

"Is life so dear or peace so sweet, as to be purchased by the price of chains and slavery? Forbid it Almighty God! I know not what course others may take, but as for me, give me Liberty or give me death!"